This Is How Distance Should Feel Rogue Irons are the best combination of distance, accuracy and playability ever in a Callaway iron with a 360 Face Cup and VFT, multi-material construction, and Urethane Microspheres.

Rogue Irons: How Distance Should Feel

Two innovative clubface technologies work together to deliver more ball speed across a huge area of the face for more average distance. The Face Cup employs a shallow, flexible rim around the perimeter that flexes and releases at impact to increase ball speed. Variable Face Thickness technology (VFT) influences how the face then flexes to promote more ball speed on off-centre hits.

A new urethane material infused with thousands of tiny air pockets called microspheres, and injected directly behind the hitting surface, dampens vibration of the thin, fast face to improve sound and feel without compromising COR and ball speed. At impact, the microspheres change shape and flatten to create room for the urethane to flex and to prevent a slowing of the face, maximising ball speed. 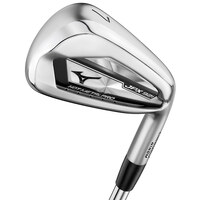