Callaway R&D has successfully installed their groundbreaking Jailbreak Technology in a fairway wood for the first time, with two steel Jailbreak bars that stiffen the body, placing more impact load on the face to promote increased ball speed and distance.

Jailbreak created a shift in ball speed and performance for Callaway’s Epic Driver and now Callaway has engineered a way to unlock these very same ball speed benefits with the launch of Rogue Fairway Woods and Hybrids.

Two vertical steel Jailbreak rods, positioned directly behind the face and cast into the main body of each head, work in-sync with the revolutionary Face Cup, to create new levels of ball speed, even on off-centre hits.

Rogue fairways also incorporate our proprietary Internal Standing Wave technology (ISW), which Callaway pioneered in their irons to position the CG with tremendous precision. In Rogue fairway woods, ISW positions the CG low and forward to promote a distance-enhancing combination of high-launch and low-spin.

Rogue fairway wood crowns consist of proprietary triaxial carbon composite material that’s lighter and stronger than steel. The saved weight, along with weight saved by the fixed hosel, is used to pull the CG dramatically lower to promote easy launch, and to increase MOI for forgiveness.

Boeing and Callaway collaborated to develop the Speed Step technology used in past Callaway metalwoods. In Rogue, Callaway worked with Boeing to redefine the geometry of the leading edge to improve airflow to promote faster head speed. 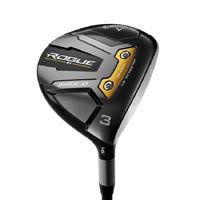