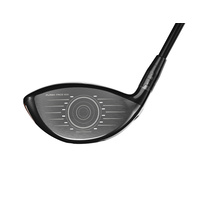 MAVRIK MAX is well suited for players who want a long, easy-to-hit driver with the ability to reduce slices off the tee. It has the largest footprint of the three models, boasts the highest MOI, is the easiest to launch, and has the most draw bias capability. For golfers who struggle with impact dispersion, MAX offers a tremendous amount of high-speed surface area on the face. MAX also incorporates two interchangeable weights, 14g and 2g, positioned in the sole near the heel and center-back. Installing the heavier weight in the heel creates maximum draw bias; installing it in the back creates maximum MOI. Available in 9º, 10.5º and 12º lofts.