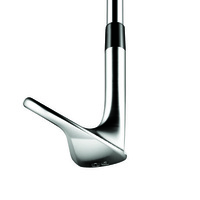 The Nike VR X3X Toe Sweep wedge features an all-satin chrome finish and is constructed of 8620 carbon steel for incredible feel and consistency. It also includes high-frequency X3X grooves for improved spin rates, consistency, and control. The Toe Sweep grind has an extremely wide sole near the toe with a very narrow sole at the heel for versatility.

Whether it’s high rough or wet grass, difficult lies or daunting bunkers, Nike Golf craftsmen and engineers at The Oven have created the solution for the toughest of short game shots.

Over the course of five years, the Nike Golf team prototyped, analyzed and tested a range of functional sole configurations before landing on an innovative design that makes it significantly easier to hit out of the toughest lies from anywhere around the green. A wider sole area toward the toe and a relieved heel ensure versatility around the greens and make it easier for golfers to hit out of the bunker. Improved X3X groove technology delivers a more consistent shot in any condition, better ball flight and superior stopping power on the green.

“We built the VR X3X Toe Sweep wedges from the ground up,” said Mike Taylor, Nike Golf Master Modelmaker. “Our Tour athletes have told us that the toe side of the sole is most critical in bunker performance. In a bunker shot, these new wedges are carefully crafted to provide bounce relative to the path of the club head. Around the green, our athletes ask for material to be ground away from the heel to aid open-face versatility–and we’ve done that with this new design.”

The toe-sweep sole is an innovative combination that blends the best attributes of several of Nike’s most functional grinds. The VR X3X Toe Sweep wedges perform like a wide sole from the bunker, but slide through the tightest lies around the green with ease.