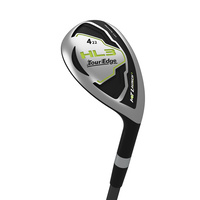 ​​Click here to learn more about our authentic club fitting!

The HL3 Triple Combo set provides play­ers with the most versatile set available in golf. Featuring two hybrids, two Iron-Woods and three irons, the Triple Combo set ensures that every shot will have the most forgiving, accurate club to attack it.

Tour Edge hybrids and iron-woods have been setting standards for years as industry pioneers in hybrid club advancements. The Tour Edge R&D team continues the tradition in the new Hot Launch HL3 Hybrids and Iron-Woods. Both clubs are featured in the HL3 Triple Combo set, along with the more traditional HL3 Irons to form a complete set. The HL3 Triple combo set includes two HL3 Hybrids, two HL3 Iron-Woods and three HL3 Irons; making the HL3 the most versatile set of irons on the market and a way to efficiently maximize your investment over buying the clubs individually. Distance gaps will be perfectly in tune from club to club while offering optimal launch, distance and accuracy from every distance.

“The HL3 Triple Combo set combines three different HL3 models in a perfect seven-club blend,” said Executive Vice President of Tour Edge John Craig. “The set earns classification as a maximum game improvement set due to the ease of use and added distance it provides, but it really stands out as a set that will bring efficiency and control to your golf game. It’s not so much improvement, but it’s the dramatic reduction of common mistakes that sneak into every round provided by this three club blended concept. I think that’s something that every golfer can get behind, making the HL3 Triple Combo a visionary set that every golfer should be taking a hard look at.” The shallow face/high toe design of the HL3 hybrid produces an expanded sweet spot and a thinner face for added power. The amazingly easy to hit HL3 Iron-Wood features the heavy sole that positions more weight below the ball for higher flying shots. The HL3 8-iron through pitching wedge irons provides a traditional set up designed to deliver exceptional feel and control on approach shots.